In 2002, CTC Mornington Peninsula received six years of state funding to begin a pilot of the Communities That Care process across the shire. 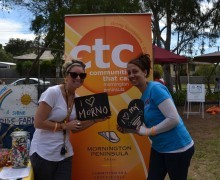 Since it began the CTC process in 2002, the Mornington Peninsula Shire has gone through three cycles of the CTC process, including gathering three rounds of student data from schools across the entire Shire using the CTC Youth Survey. Mornington Peninsula Shire, (MPS) is a geographically large outer ring semi-metropolitan / semi-rural municipality to the south of Melbourne in Victoria. The current population is 156,000. The population is spread across 40 townships over 740 square kilometres. The municipality is a coastal peninsula with substantial vacation accommodation that experiences a seasonal population increases of up to 300,000.

In 1999, a state-wide survey identified the municipality to have one of the highest rates of youth substance use and related problems. Although there were a number of services offering assistance to youth with problems, at that time there was no systematically planned effort to increase community prevention services.

In 2002, Mornington Peninsula Shire Council received six years of state funding to pilot the Communities That Care (CTC) process across the shire, (MPS has fully funded CTC since 2008). MPS Council appointed a CTC Board to implement and oversee the strategy. The CTC staff and CTC Board Members received training and support from visiting USA based CTC Trainers. The training gradually increased knowledge, expertise and readiness for prevention work. The decision to divide the municipality into six, population equal, Local CTC Groups was made by the Community Board. CTC staff then recruited to, and established, coalitions for each of the six Local CTC Groups.

Since the start of this partnership, there have been significant benefits for the Mornington Peninsula community including reductions in alcohol use, tobacco and marijuana use and antisocial behaviour. CTC Mornington is currently working towards decreasing depressive symptoms by targeting the risk factor family conflict and the protective factor prosocial rewards for community. CTC is currently in the process of rolling out their Community Action Plan which includes 4 key programs: